My DSLR Rig For Documentary Shoot in Solomon Islands

Canadian-based documentary camera man Olivier Cheneval took time out from a documentary shoot in the Solomon Islands to describe his DSLR camera rig. The rig was donated to the project by the rig's maker, SHAPE. In this video Cheneval describes how he used the rig, the pros and the cons.

Equipment in this video:

About The Documentary Project

The documentary shoot in the Solomon Islands is part of project that Olivier Cheneval founded called The Sound Alliance.

"The Sound Alliance is a non-profit organization that provides communities throughout the world with the equipment and training to record, preserve and promote their traditional music."

In the summer of 2012, Cheneval and co-director Dax Hickson traveled to the Solomon Islands and filmed the Waru Nonoasi Bamboo Orchestra as the group recorded their premier album and performed on stage at the largest festival in the nation's history.

Watch a preview trailer of the documentary: 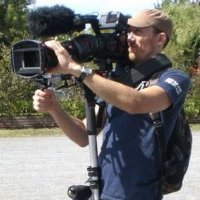 Cheneval works as a documentary and corporate cameraman in Montreal, Canada.