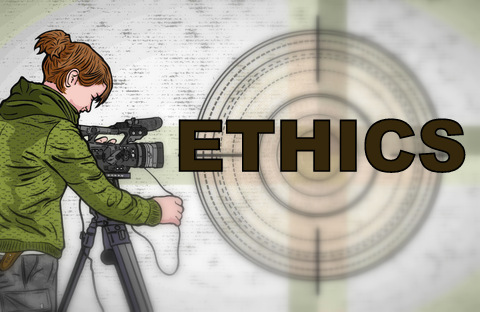 As documentary filmmakers, we hold within our grasp much power and responsibility. Audiences will view our work and assume that we have done the necessary work to portray the information as accurately as possible.

But there has been a disconcerting trend in documentary filmmaking in recent years where filmmakers are taking a much more casual stance on this issue.

Independent journalist Tom Roston, in his DocSoup blog for PBS, coined the term “Doc Vague” to describe a type of documentary that is loose on the facts. In his blog, he posted the following exchange between a reporter and the director of the documentary “Oxyana” which came under some heat for including clips in the documentary of subjects quoting incorrect information.

Reporter: In the documentary, there were people that spouted out percentages, numbers, information about homelessness, overdoses, hepatitis C cases, babies born on methadone and so on. How did you verify that information?

Director: That’s the thing. This isn’t a film that is meant to be informational in that way. It’s meant to be immersive. It’s meant to show the up close and personal of what drug addiction looks like. These are stories from the people down there. These are their perspectives. These are people dealing with this every day. We didn’t question those things we just we were a vessel to their voice.

In the traditional world of documentaries and journalism, what that director did is a big “no-no”. And yet, according to Roston, that attitude is showing up more and more in the documentary world. What do you think about this trend?

I recently caught an episode of Ondi Timoner's documentary talk show BYOD (Bring Your Own Doc) where she was interviewing Oscar-nominated documentary filmmaker Joe Berlinger.

“I certainly don't want to tell people how to make a film or why they should make a film,” says Berlinger. “Some people make films for advocacy reasons, some people make films for storytelling reasons, but I've always felt the tension between what is that balance between journalism, because after all we're journalists, between advocacy, because sometimes you advocate for your subject, and storytelling. And sometimes the tensions between those three disciplines.. storytelling, advocacy and journalism are in conflict with each other.”

Here's my take. I get that documentaries are a personal journey and there is no “one way” to make a documentary. However, as a former journalist, every cell in my body cringes with the idea of spreading rumors or misinformation. Who does it help to do that? I believe there are other ways to tell a story creatively without spreading false information.

The general rule of thumb in journalism - basic journalism ethics - requires checking three “credible” independent sources before reporting a particular fact. Just because someone in an interview gives some incorrect information doesn't mean it's okay to share that information. If the quote is so compelling that you must use it in your film, that's fine. Just make sure the audience knows the information was not factually accurate.

What do you think about this topic? Share your opinion/comment below.