You Asked: How do you effectively screen a film online? Question: I have found that online audiences are very different to audiences in the cinema, indeed few viewers watch films I have released the whole way through.

I have talked to other filmmakers and they have found the same problem. I think this is in part as people have shorter attention spans when they are online, often skimming through things that interest them rather than spending time to enjoy it.

The only solution I have found is to make a catchy trailer and hope this inspires viewers to watch the whole film. I think this is an important area to look at as this is becoming a very popular way for independent directors to release their films.

Not exactly sure how to answer this other than to say you are correct in your assessment.

A snazzy trailer is certainly a great way to capture attention and ignite interest in your film. But getting someone to START watching your film and KEEPING them engaged are two very different things.

One idea when making your film is to show it to test audiences (online) and use technology to see exactly where they stop watching your film. Wistia is one example of a video hosting site with this technology. 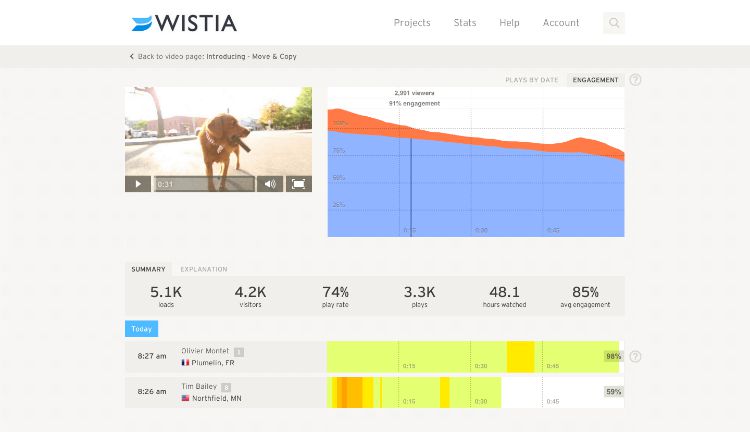 Wistia's analytics tool can show how well your video captured and held your audience's attention. Engagement graphs (example above) show exactly where people drop off or skip ahead while watching your content.

Use that intel to re-edit your film to keep audiences engaged all the way through. Yes, audiences tuning out after a short period of time is in fact an indicator of shorter attention spans and it's a wake-up call to us filmmakers that we have to do a better job at keeping our audiences entertained and engaged.