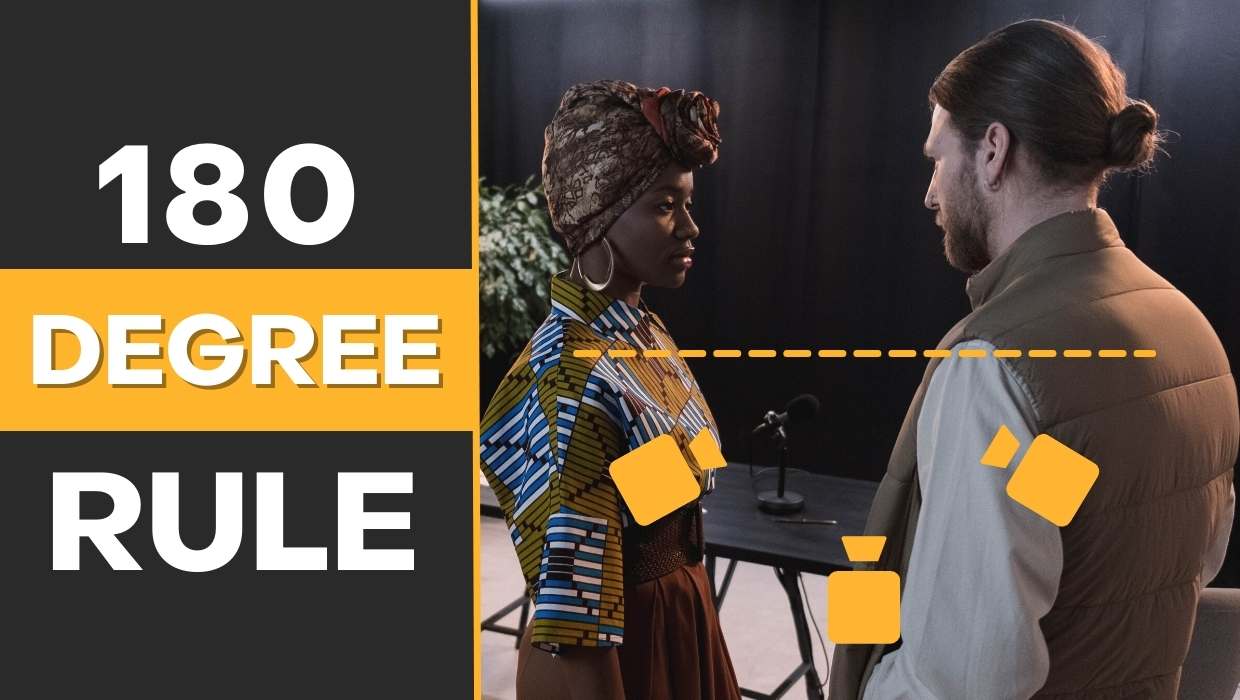 What does filmmaking have to do with geometry?

In the video below, Camber from Camber Motion uses illustrative clips to explain what the 180 Degree Rule is and how to use it in your films.

Thanks Camber Motion for the awesome breakdown.

The 180 Degree Rule is a filmmaking tool that helps directors maintain the same left-right relationship between two (or more) characters on screen.

And it really works for replicating realistic angles in your film.

First, draw a perfect 360° circle around two stick figures, and then draw a line from person to person. 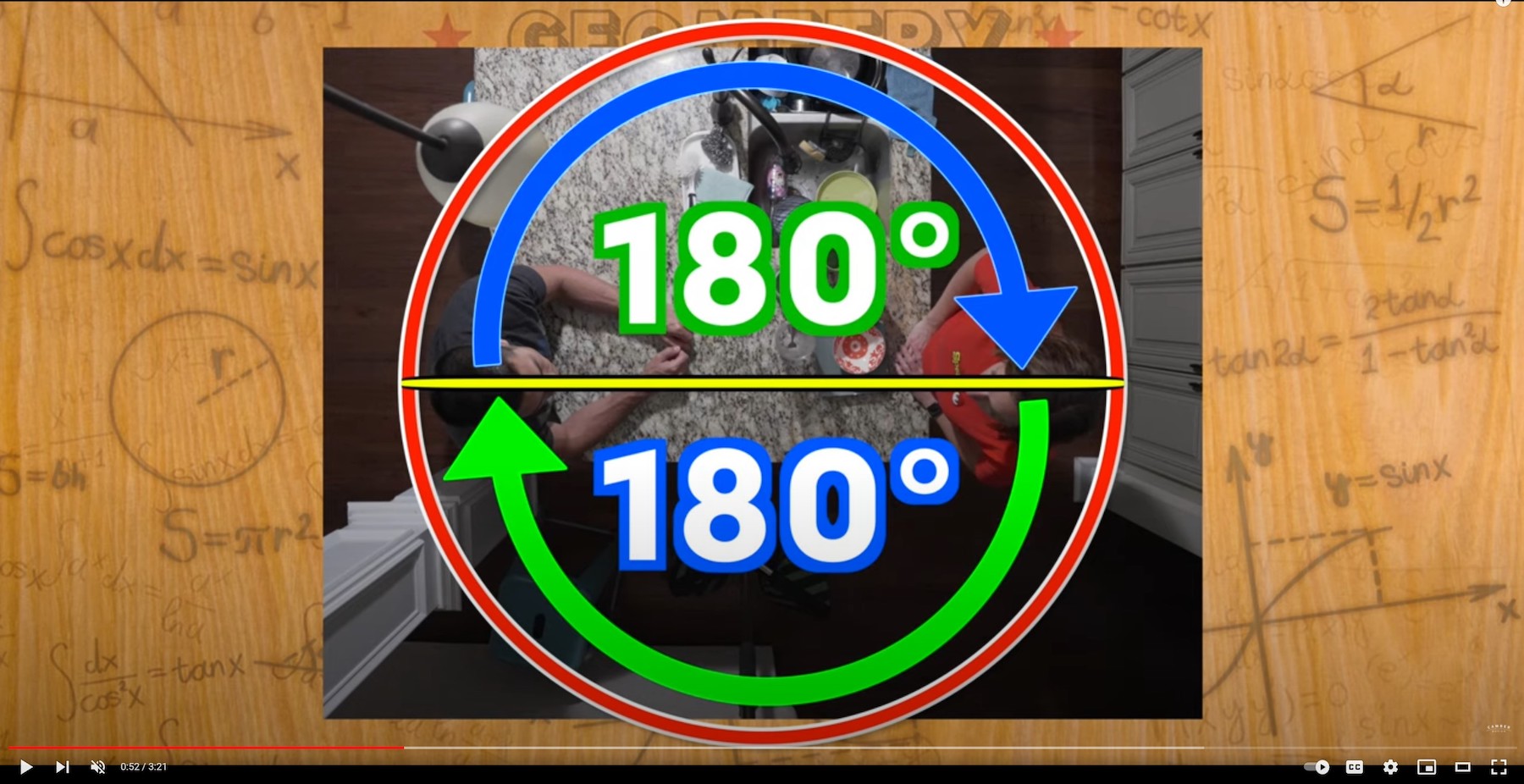 That’s the 180 degree angle from your subject.

Now, let’s say you want to shoot a conversation or interview between two people. 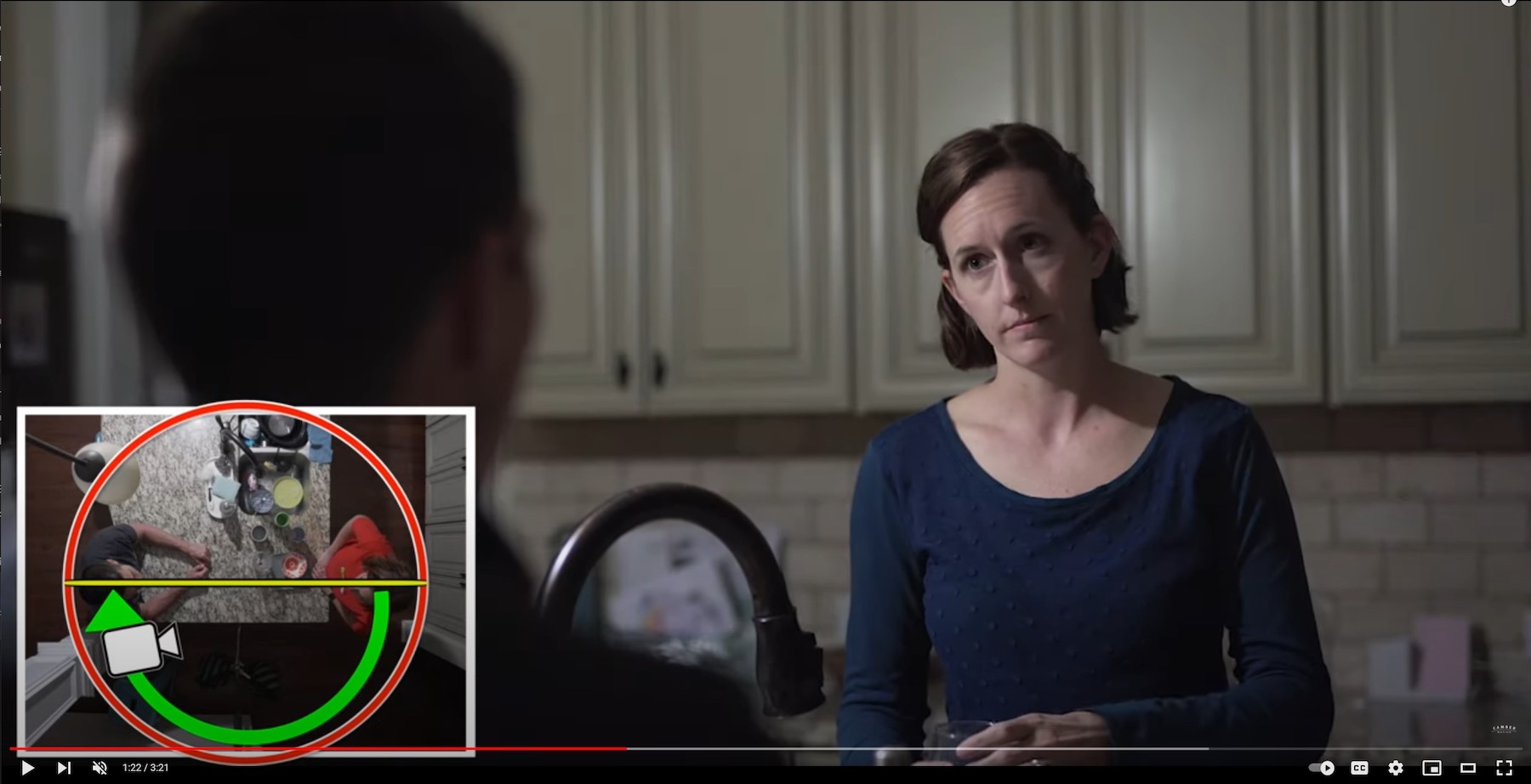 
In a typical back-and-forth scene, viewers expect characters to remain in the same place.

In order to achieve that, the camera must operate from one side of the line the whole time, or in a range of 180 degrees (a semi-circle). 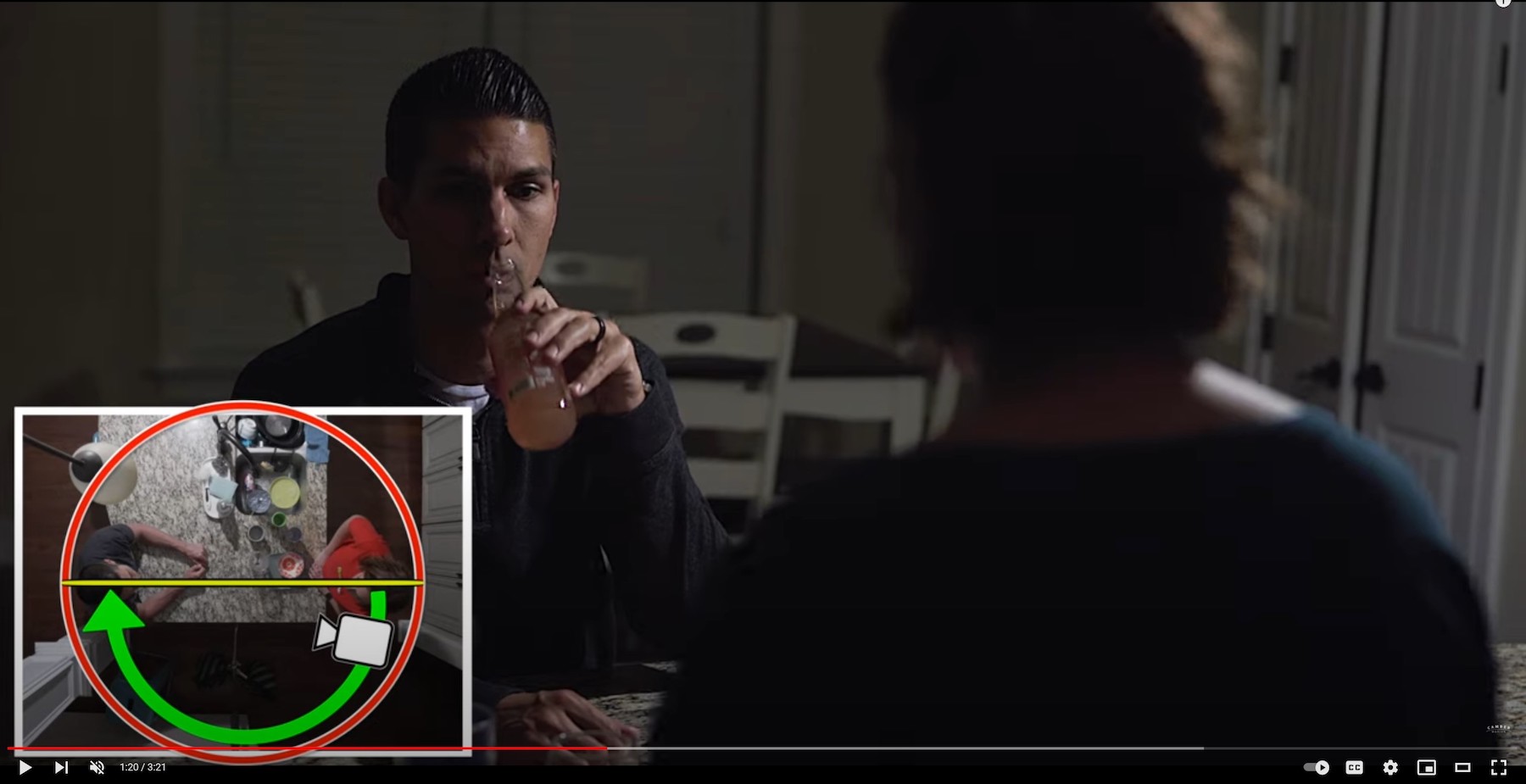 The 180 degree line tells you, the director, which side of the frame each person should appear.

If person 1 suddenly appears on the opposite side of the screen, the audience will think one character has switched places in the middle of the scene, because we will have changed sides of the line.

From the viewer’s perspective, this will feel ‘off.’

Constant angles help the audience understand what your subject is looking at, moving toward, and interacting with.

More generally, the 180° angle is your character or subject’s natural line of sight. That is, where their eyes are looking.

And that doesn’t always have to be another person.

For example, is your subject following something off-screen, or looking over their shoulder? Use the 180 Degree Rule here too.

This means that in every shot, think about which side of the imaginary straight line you started from.

Did you already film your character or subject walking left across the frame?

Keep them moving left, and you’ll be in compliance with the 180 Degree Rule.

When Does The 180 Degree Rule Apply For Documentary Filmmakers?

If you’re thinking that you won’t need the 180 Degree Rule as a documentary filmmaker, think again.

Here are 3 ways that knowing the 180 Degree Rule can help you out while filming your documentary.

Not following the 180 Degree Rule can really mess up a good interview.

While filming your interviewee, make sure their line of sight is the same throughout. In other words, make sure they’re always looking at you (off camera). Oh, and stay put!

This will guarantee that your interview feels real and professional.

The 180 Degree Rule is especially important if you are shooting your interview from the side AKA a profile interview.

You don’t want to suddenly flip sides in the middle of the interview. 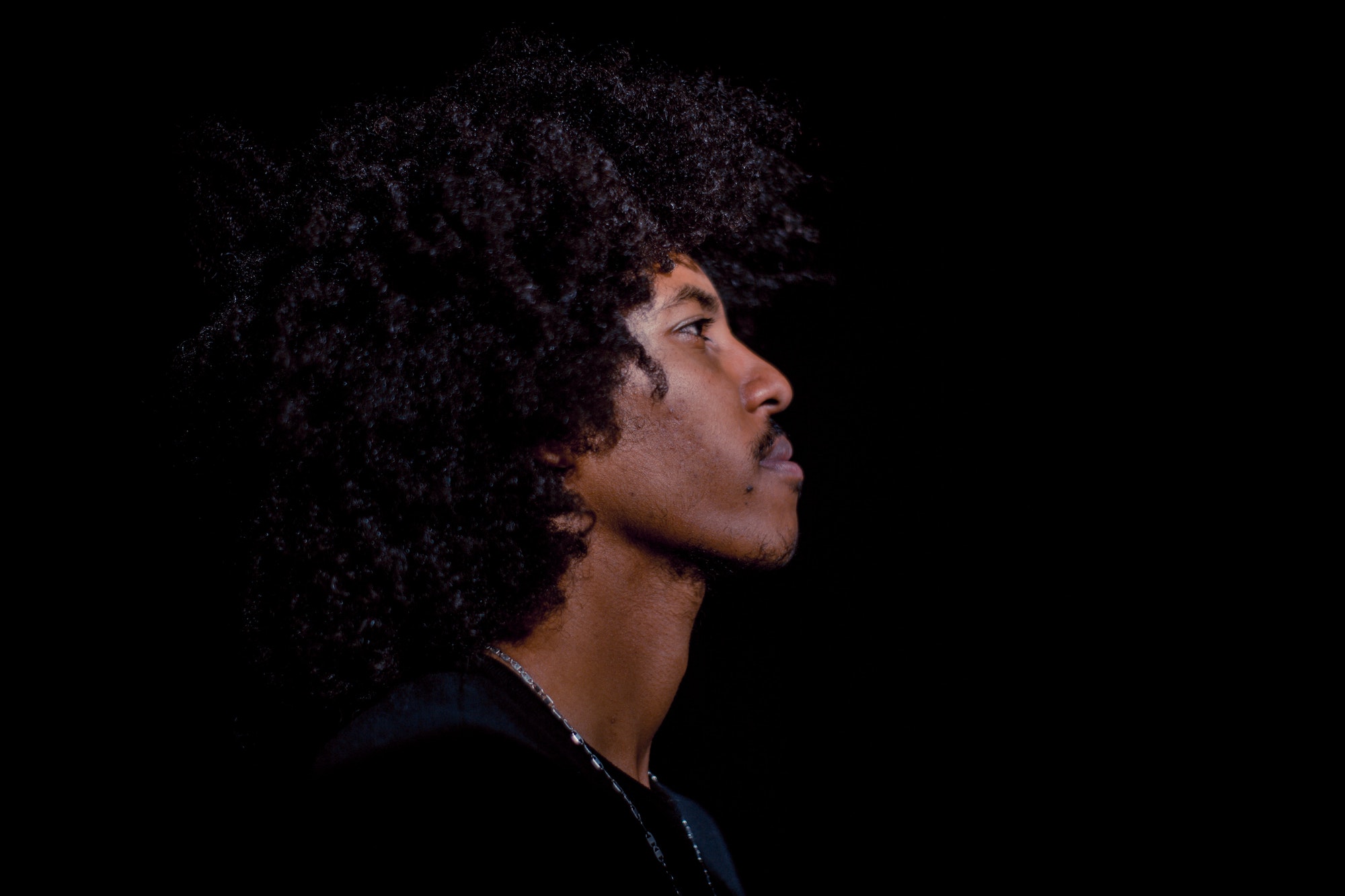 Interview framing from the side AKA a profile interview

2. You want to break the rule

In documentary, you sometimes have to break the 180 Degree Rule while filming a live scene.

Or, you could choose to break the rule depending on your visual approach.

If you’re going for a disorienting aesthetic, or you’re filming a detail-packed one-shot sequence, using all 360° may bring more cinematic value to the scene.

3. You have to film the same action over two separate days

Let’s say you’re documenting your subject on their daily walk, and you want (or have to) film that process more than once on different days.

The 180 Degree Rule will help you out when you edit those two (or more) days together.

By maintaining the same side of the line both days, the scene will appear to be from the same day (just make sure that your light and weather conditions are constant).

Whether you follow the 180 Degree Rule in your film is up to you.

But, subconsciously, your audience will always follow this rule.

Check out some examples of ways to creatively break the 180 Degree Rule so that your viewers are pleasantly surprised: