Documentary filmmaker Erin Levin left her job with CNN to launch full time into making a documentary about the African's Children Choir.

We are impressed with Erin's tenacity and positive spirit as she coordinates this massive endeavor.

We asked Erin to share with us a bit of her story and some lessons learned. 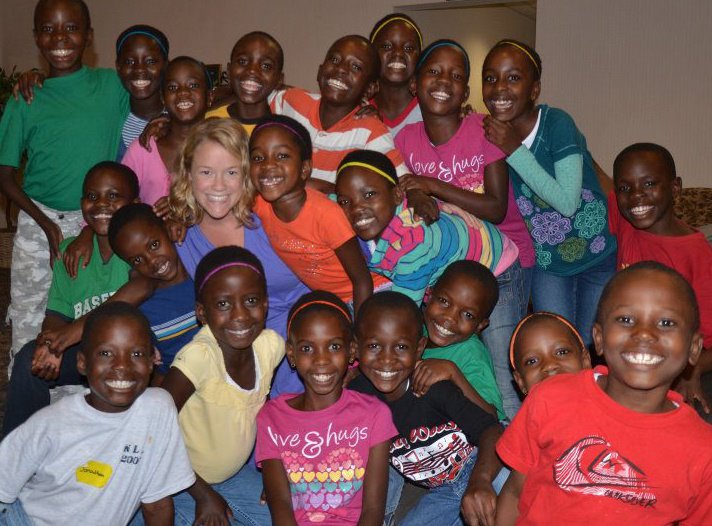 Documentary Filmmaker Erin Levin with kids from the African Children's Choir for her feature documentary imba! (a Swahili word for "sing")

Please share with us a little background. How did you first get into television and filmmaking?

Growing up in Atlanta with a civically engaged mom, I became a news junkie by four-years-old. I always looked up to the anchors on our local ABC affiliate, then John Pruitt and Monica Kauffman, and even had the privilege of interning for them on college breaks. I dreamt of working as a Christiane Amanpour meets Katie Couric hybrid, being the face of smart international journalism and fashionable national activism.

While at the University of Virginia (Katie's alma matter) I became passionately fascinated with African history, government, culture and development so I decided to enter the Peace Corps before "officially" beginning my news career.

In Africa, my Amanpour and Couric ambitions quickly turned into a deep desire to share the Africa I was experiencing with the rest of the world. I went there because I thought I could help and change a community in Madagascar. Instead, my community ended up helping and changing me in great ways for the better.

Upon returning home I worked at CNN for a few years (Christiane's alma matter) and to make a long story short, I am now finally living my dream of sharing the beautiful, dignifying, progressive African story through my first independent documentary feature film: imba!

Tell us about your current documentary project and how you first came up with the idea.

The summer between graduation and leaving for Madagascar to serve in the Peace Corps I worked for a rock band called Dispatch on a three-day benefit concert for Zimbabwe at Madison Square Garden. We ended up inviting a group called the African Children's Choir to perform with the band and I fell in love with the kids and their story. These children were all either orphaned or their families could not afford to send them to school. But their hearts were overflowing with joy. Thanks to the Choir, their education was now going to be funded through university and they would be able to fulfill their own dreams to uplift their communities themselves.

For two years, though, I lost touch with the Choir. I was in Madagascar (the Choir is in seven African nations but Madagascar is not one of them) and then worked tirelessly at CNN on the Presidential election of 2008. In the summer of 2009 I took time off work to visit my friend's non-profit in Uganda. It was there that I literally ran into the Choir again. I ended up shooting and producing a short film on the Choir for CNN International. The past few years it has been my wish, hope, goal, dream and prayer to be able to go out on my own and produce a documentary feature film on the Choir because I believe their story is the greatest I've ever experienced and I want to the whole world to get to learn from and enjoy these children and all they have to share. This past summer I finally began full-time production of imba!

What has been your biggest surprise so far making this film?

How hard it is! This is the most difficult job I have ever had, and I don't tend to choose the easy path. Fundraising in this economy is incredibly challenging and I often feel discouraged. Fundraising is a fulltime job. Coordinating the multitude of logistics for an international production is also a fulltime job. As is transcribing, writing and producing the short films and feature film. So it's like having three fulltime jobs at one time - all of which pay less than minimum wage.

I don't want to scare anyone away from filmmaking though and know I am preaching to the choir, so let me also share one pleasant surprise: amid all the chaos, frustration and hard work, I still believe it's totally worth it!

We first met during my documentary fundraising workshop in Atlanta a few weeks ago (thank you for standing up and pitching your project to the class!). When I learned about your documentary project and your fundraising efforts to date, I noticed that you are doing a lot RIGHT! Can you share a few fundraising tips regarding what has worked for you?

Haha. I feel like I am not doing nearly enough, but thank you for the much needed boost of confidence! One thing which worked really well for me, though it was very time consuming, was sending personal emails to 400 of my closest friends and family. I caught up with each of them personally, shared the story I am hoping to tell through this film and how much it means to me and the difference I know it can make in our world, and then I asked them to each donate $27 for my 27th birthday. I raised over $20,000 this way! Another really good choice I think I made at the beginning was to work through a fiscal sponsor so that all donations to the film are tax-deductible. My fiscal agent is the Creative Visions Foundation in LA and they are so helpful!

Tell us about your crowdfunding campaign and important lessons learned.

So my 27 Campaign was a crowdfunding campaign which I did on my own, through donations on my fiscal agent's site, instead of using a third party such as Kickstarter or IndieGoGo. I wanted it to be very personal and keep the administrative and overhead costs down. Now that the film and our community are growing, we are using some of the money raised to edit a 10-minute short version of the film. We will enter it into a few festivals to hopefully garner more interest and support. If we're still in dire need of more funding to continue or complete the film next year, we will likely put on a proper crowdfunding campaign with a site like Kickstarter or IndieGoGo - though thanks to a number of brilliant mentors and advisors, I am taking a hiatus from mass social fundraising and going to focus this Winter more on high dollar donations to really get the film budget funded (of course every donation, big or small, is greatly appreciated!).

What is your goal with this documentary: fundraising goal, launch date, impact on lives, etc.

My goal is for a least one million people to see imba! and for at least 10% of them to walk away from it inspired enough to be activated to make a difference themselves - either by donating to or volunteering with the Choir or even just serving more in their own community.

We began filming in May this summer and will complete filming in September of 2013. Our hope is for the film to come out in the Spring of 2014 just in time for festival season. I'd love to see the film playing in theatre's worldwide, on Nexflix, Hulu, HBO, PBS have an audio version for NPR etc. I also hope that a corporation will come behind us and make a donation to the Choir for every person that watches the film online.

I am donating 100% of film proceeds to the Choir and have high expectations for the world to follow suit :). Finally, I am going to put together a curriculum with former Choir members who are now human rights attorneys, HIV/AIDS doctors, TV news anchors, teachers and famous musicians serving back in their countries - the curriculum will be for schools and community groups to use alongside the film to learn and engage more with all that we have and can learn from Africa.

Wow. No small thinking for you! Any final advice for new filmmakers interested in making a documentary?

I think the best decision I have made in the process so far is to partner with a crew much more successful and experienced than I am. I can lead them with the passion and energy that the Choir fills me with and then we can bring out the best in each other to create a truly remarkable film. You can check out my rockstar crew here: https://imbafilm.tumblr.com/team

About the imba! Documentary

imba! will bring together the playfulness and bittersweet beauty of childhood in a cinematic adventure through North America via the lens of Moses and Angel, two African children on a journey that will change the course of their lives forever.

The film stands out from the rest for two main reasons:

1) the entire story will be magically told through the eyes of children and 2) much like the Choir itself, the film is not about what Westerners bring to help Africa, instead it is about gift of song and joy that these African children are bringing to us.

To get involved, email Erin at erinjlevin(at)gmail.com and/or donate by clicking the pretty yellow donate button on the site.

Erin is an award-winning humanitarian journalist and filmmaker. Her production and outreach experience ranges from ABC and CNN to the Peace Corps and non-profits around the world.

At CNN, Erin worked closely on the 2008 election coverage; found a niche in covering Africa, musical activism, the changing face of homelessness and became an abolitionist through her coverage of human trafficking.

Most recently, Erin worked as the Community & Social Media Manager as well as the Filmmaker at Better World Books, an online social enterprise bookstore. Erin is now working full-time on imba!, her first documentary feature. She is also a freelance writer for the Huffington Post and Paste Magazine and a social media and outreach guru for small businesses and non-profits hoping to share their work and passion with clients, donors and fans.