Making My First Documentary: An Interview With Amber Talarico 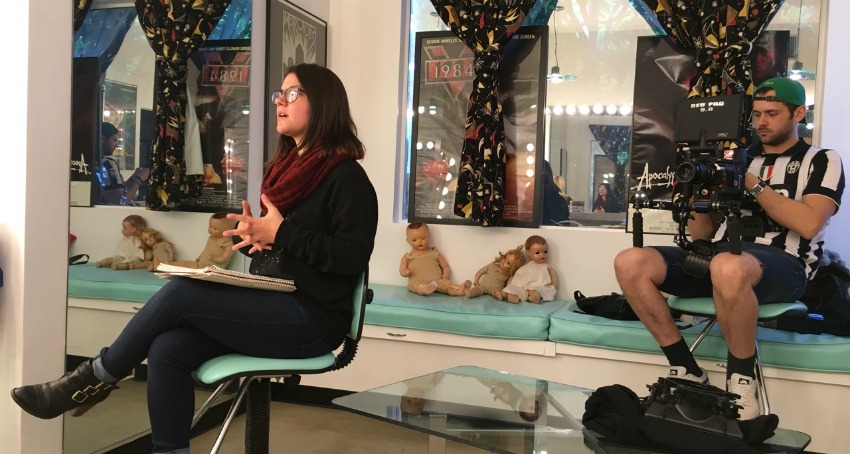 Behind the scenes of director Amber Talarico and cinematographer Yousef Arafat filming an interview for WHAT IT TAKES documentary.

Amber Talarico recently completed her first documentary which puts a spotlight on the Make-Up Artist industry. Her documentary is entitled WHAT IT TAKES and is currently on an eight city screening tour across the United States. Congrats to Amber!

Amber has worked as a professional make-up artist for more than a decade and she wanted to shine a light on what it really takes to make it in her profession. She interviewed 20 Award Winning Make-Up Artists and even put herself on camera to document her own personal insights and struggles.

We first met Amber back in 2014 when she signed up for one of our courses.

We wanted to follow-up with Amber to learn what it was like producing a documentary for the first time and any lessons she's learned along the way.

As a first time filmmaker, what surprised you most about the documentary making process?

What a great question! There were so many things that surprised me, ha! I would say the biggest surprise was just how hard it is to raise funds as a first time director. We had so much help along the way that I will always be eternally grateful for. Something I did come to realize though is that people will only go so far with out being paid, and rightfully so! Which was a little bit of a challenge.

Did you shoot this documentary as a one person crew or did you have a team?

It depended on the day! On average there was about 3 crew members per interview and anytime we filmed any follow-up footage it was with just one camera operator.

Did you raise money for your documentary? If so, what was your fundraising strategy and where did you find success?

Yes! We did an Indiegogo twice which wasn’t my favorite way to raise funds. It felt a little to pushy for me. So, I came up with the idea to create a makeup challenge that raised funds on our social media pages. Both of these crowdfunding sources (IndieGoGo and the Make-Up Challenge) were great, however they didn’t bring any significant amount of funding to the project. Although the makeup challenge brought a ton of awareness to the film!

What was the Make-Up Challenge? Did you raise any money from that or was that primarily a way to build awareness?

The makeup challenge was something we created to bring awareness to the film as well as raise funds. We had themes for each challenge with celebrity makeup artists as our judges. Fans would donate money to enter the challenge and once the challenge ended, the judges would choose from our to makeup entries. Then the winner would receive a prize package of sponsored makeup (these sponsored prizes changed every challenge), and the judge would give their detailed critique of the makeup to the winner. Some of the judges included Eryn Krueger Mekash and Mike Mekash, the makeup dept head and key special fx makeup artist for American Horror Story, and Johnny Depps personal makeup artist Joel Harlow.

The money raised was not significant but it really helped with bringing awareness to the film! 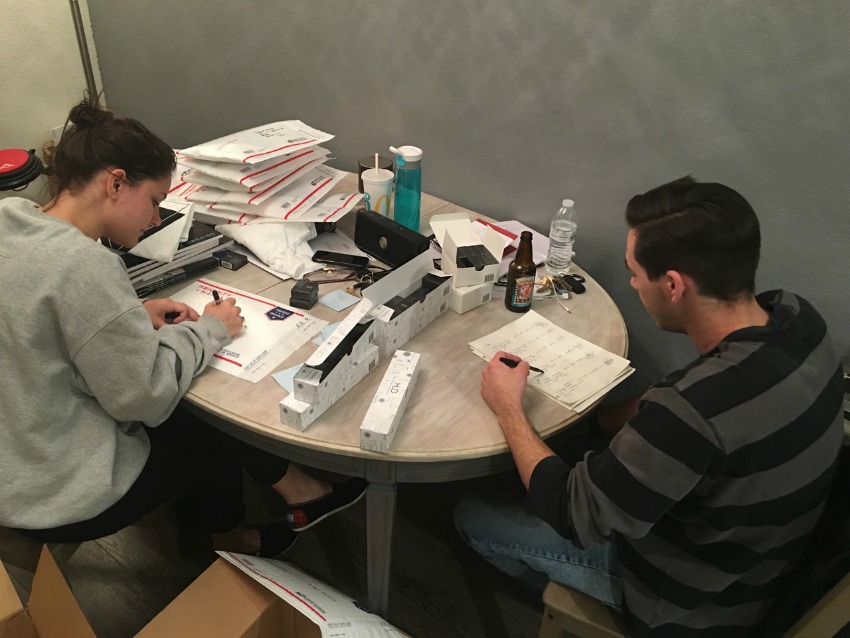 What were your tools for the job (gear, editing software, management software, etc)

I was fortunate to have a cinematographer friend lend us his RED Epic camera for our big interviews, and then we used a Canon 7D and 60D for the rest. At the VERY early stages, I just used a handheld Canon camera. Editing software was Final Cut Pro. Sound equipment was a ZOOM and on the bigger artists we either rented out high quality boom and LAV equipment or hired a boom operator.

If you were starting this documentary again from scratch, what would you do differently this time around?

I would have started to utilize our social media a little differently and eventually hire on someone else to manage it. It become quite exhausting to manage the social media, website, direct, produce, etc all at once. Also I would have been smarter about what was prioritized in finances.

When did you first get the idea for the documentary and where did you go to learn the skills needed to make a film (did you have any prior filmmaking experience or was this your first time?)

The idea came to me when I had realized that there were a lot of girls I graduated makeup school with that thought this career was going to be easy from the get-go. And when times became tough, they immediately wanted to give up because they thought there must be something wrong with them, when in all reality it is just something we all go through as artists-in ANY industry. So I wanted to create something that would be inspirational and motivational to those who maybe going through a hard time or those who are thinking about getting into the industry of makeup but maybe don’t know “what it takes” to be successful.

I had ZERO filmmaking experience. I have been doing makeup for 9 years and so I have quite a lot of experience working sets in that aspect. But I did countless hours of research and educated myself on what I needed to create this film-from the start to finish.

My first step was purchasing the Desktop Documentaries Course in 2014, and it helped immensely! From there I just purchased book after book about producing, writing, directing, marketing, etc.

The research never stopped and it is STILL going as I am phasing into the marketing and distribution phase. I also took several documentary courses, workshops, webinars and seminars. One of my favorite courses was the Intentional Filmmaking Class through my film’s fiscal sponsor, From The Heart Productions. 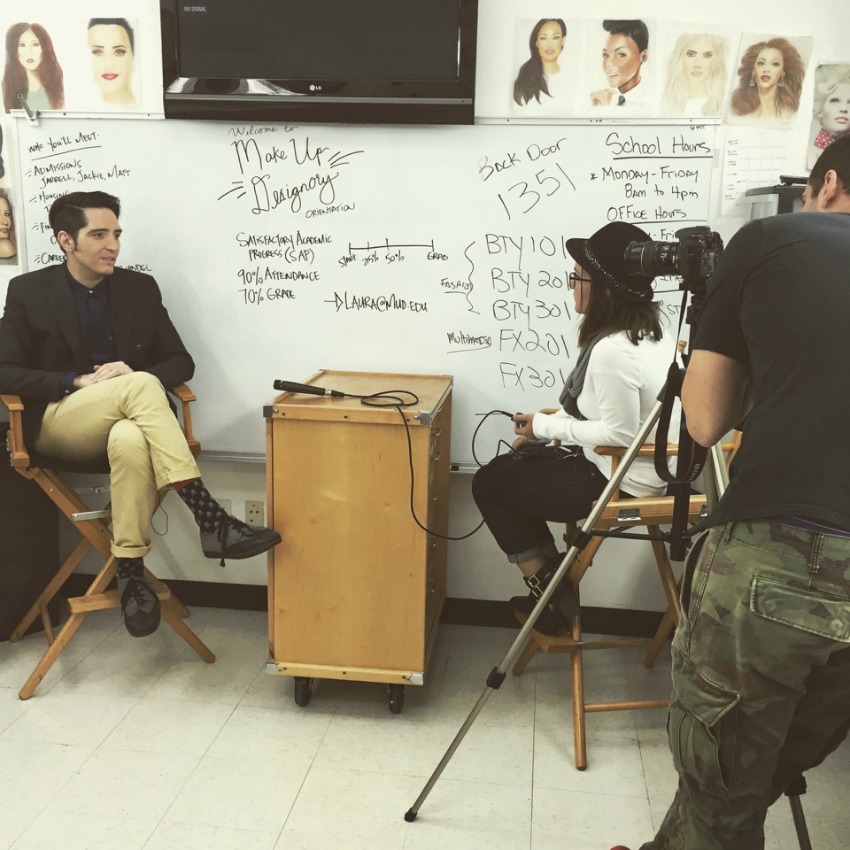 What is your ultimate goal with this documentary (what motivated you to keep pushing forward even when things got tough)?

My goal is to first and foremost motivate and inspire other artists to keep going after their dreams! Another goal is to educate those who are not in this industry on exactly what it is we do as make up and special FX artists, that it’s not all glitz and glamour. It’s a ton of hard work and it is something to be respected for.

Have you considered creating an online course for make-up artists to build off the momentum of your documentary?

Yes! I actually have it in my plans/goal to do that next year. In the meantime I plan to create and online streaming channel on VHX and do rental/digital downloads of the film plus options for the extended version of the interviews we did. I will also be doing a one on one talk show (think Oprah or a Ellen for makeup artists... much like whet Marie Forleo does on her YouTube show Marie TV). So once I feel that has brought awareness, I think it'll be safe to promote workshops, seminars and online trainings once there is a solid market. I have realized that I am slowly but surely creating a business model out of this documentary! It's very interesting to say the least! 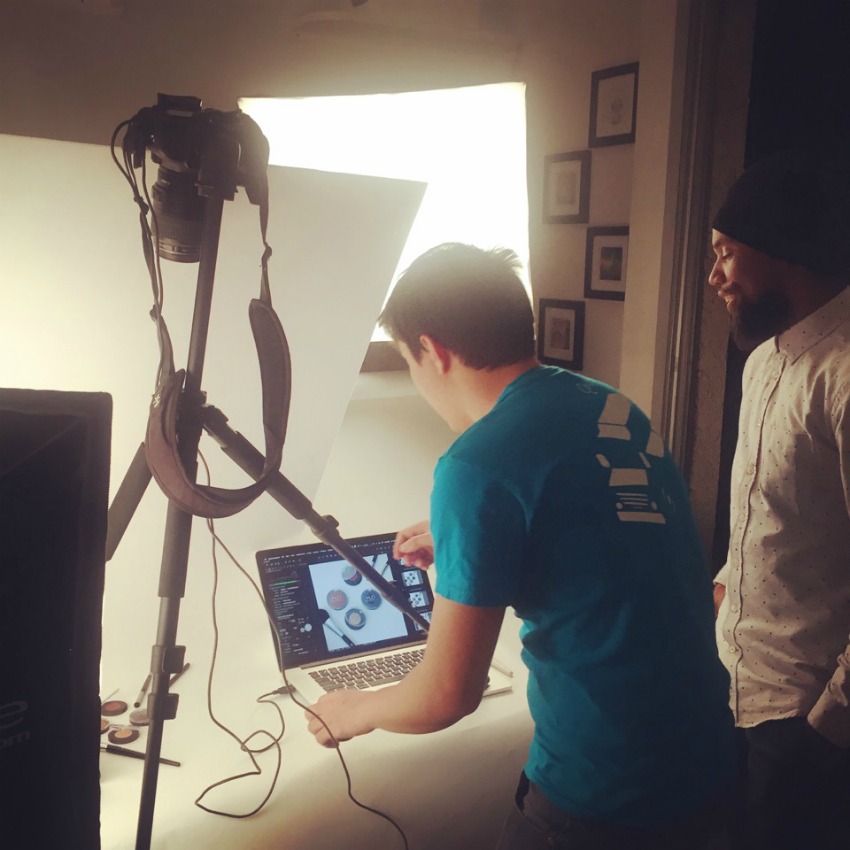 Behind the scenes photo of a photoshoot for a social media campaign during the first makeup challenge.

Any final words of advice for first time newbie filmmakers?

Do as much research as humanly possible! Keep a positive attitude at all times, it will get you so far! And never lose sight of your dream to create something AWESOME!

• How many hours of footage did you shoot: Roughly 55

• How many days of editing: 8 months

We are doing an 8 city screening event tour! Details are on our website at: