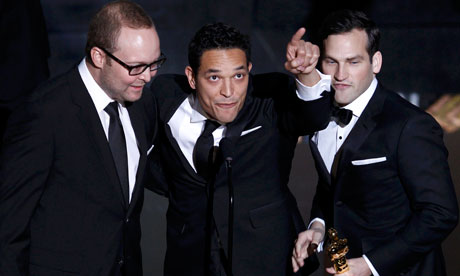 [LOS ANGELES] - Undefeated, a inspirational documentary about a struggling inner-city high school football team in Memphis, won the 2012 Oscar for best documentary feature during the 84th Academy Award® Show in Los Angeles Sunday evening. (The documentary should not to be confused with the Sarah Palin documentary of the similarly named “The Undefeated”)

Co-director T.J. Martin was so excited that he dropped the F-bomb during the acceptance speech.

"We would like to acknowledge our fellow nominees, they have inspired us. They have inspired us in so many ways, they should be up here with us, actually, that'd be fucking amazing," Martin said during the acceptance speech. Even though the word was bleeped out for the television audience, Reuters news service reported that Martin apologized just a few minutes later to reporters backstage.

"First and foremost I'd actually like to apologize for this. I don't think it was the classiest thing. It did come from the heart. It was out of spontaneity, it was completely accidental," Martin said.

Martin co-directed the documentary with Dan Lindsay, the first African American director to win an Oscar.

"A year ago today we were sitting in our editing room, depressed, thinking nobody was ever going to see this movie," Lindsay said during his acceptance speech. "A friend said, ‘Don't worry; next year you'll be at the Oscars," and we said, "You're an idiot." So we'd like to take this opportunity to apologize to him and say you're a lot smarter than we thought."

The other 2012 Oscar-nominated feature-length documentaries include:

Saving Face, which tells the story of two Pakistani women, both acid attack survivors, won the Oscar® for Best Documentary Short. The story documents the women's journey to recovery and battle for justice. The story also follows London-based Pakistani plastic surgeon Dr. Mohammad Jawad as he returns to his home country to help victims of acid violence. The film is co-directed by American director Daniel Junge and Pakistani director Sharmeen Obaid Chinoy. This is the first Oscar win for a Pakistani director.

Speaking to Reuters by phone backstage at the awards show, Chinoy dedicated the award to the women of Pakistan. The women's "bravery and resilience in the face of adversity inspires me every single day," she said. "They are the true heroes of Pakistan."

'Saving Face' is scheduled for American broadcast on HBO March 8.

Share comments and congratulate the winners and nominees below!