When you’re excited about starting your documentary project, it’s hard to focus on legal and copyright issues.

But if you have dreams of a Netflix deal, uploading it to internet, showing it in film festivals or having it broadcast on television, you need to know the basics of copyright. 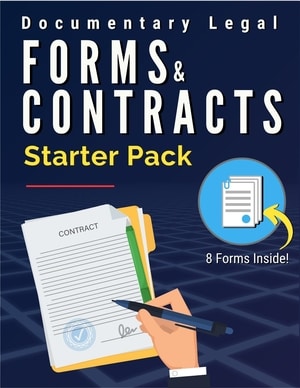 
Copyright Issues: Here’s How It Works

Anyone who makes a film can decide who sees it and who copies it.

That’s called copyright. The “Right to Copy”. This law protects the artist and their work.

Copyright not only protects YOU when you create something original, but it also protects other artists as well.

When making a film, you must respect copyright of other artists when you want to use their music, video, film, artwork, photographs, etc. You MUST have their permission and/or pay to copy their work.

And if you have the dream of selling your film, you will have to PROVE to those film buyers that you own all the rights to every piece of content in your movie. That means you will need documentation for every single item in your movie – music, photos, film clips, graphics… everything.

If it was not originally created by YOU, then you will need to have a document showing you have permission to use it and copy it.

The safest way to stay out of trouble is to:

When you make a film, everything MUST be cleared.

You must have clearances for all of the following:

Only when all these things have been cleared can a documentary be legally copied, shared or broadcast on TV or the Internet.

Consent Forms For People In The Film

*Get all the above releases (and more!) in the DOCUMENTARY LEGAL TOOL KIT by Entertainment Attorney Gordon P. Firemark.

Before you shoot on private property, get permission from the owners first. It’s best to get a signed location release.

If you are filming inside a restaurant or store and music is playing on the overhead speakers, be aware that if you use it in your film, you will need to get permission. If the music is not important, best case is to get it turned off while you’re shooting or simply edit it out of your movie. Same goes if you’re in a car and the radio is turned on while you’re filming.

LAW OF THE LAND

WATCH OUT FOR DEFAMETORY REMARKS

If one of your subjects slanders someone, making accusations that may or may not be true. (“She robbed that bank” “she’s a drug user”) Check your facts. If these statements are not true or if that person is in the middle of legal proceedings, you, the filmmaker, could be in contempt of court for influencing court proceedings.

PLAYING IT SAFE VS TELLING AN INTERESTING STORY

There’s always a fine line between keeping your movie so “safe” and “sanitized” that it’s boring vs. making it so salacious that it crosses moral, ethical and legal lines. You, your crew and your lawyer will need to walk that line together. To see just how thin a line can get, watch the movie “Borat”.

Often, copyright issues are the last thing the filmmaker thinks of when making a documentary. But copyright should be the FIRST thing you think about as you plan and beginning shooting your movie. It could be difference between an audience seeing your movie or having it buried forever in a legal mess, never to see the light of day. 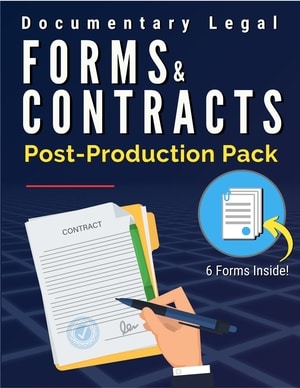 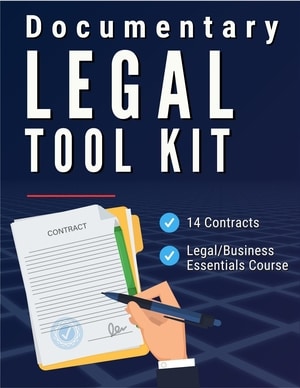 Are you dealing with a copyright issue or question with your documentary project? Carefully review the links below to see if your question has already been answered. If not, ask away! (Repeat questions will be deleted)

Comments from other visitors

Click below to see contributions from other visitors to this page...

Copyright Issues: Unauthorised Use of My Video Footage
Question: I have just seen a documentary and they have used footage from my old YouTube site that I had uploaded. This documentary has been broadcast …

Copyright Question | Permission For A 1928 Song
Hello: I'm a Brazilian/Spanish documentarian. I have a small, but crucial doubt and I would appreciate if you give help me with your experience. If …

Copyright Question: What proof do I need to legally use photos/footage in my documentary
Hi, I am aware that there are a lot of websites that contain photos/images that are either in the public domain, or where the authors have given consent …

Copyright Question:
"Ex-Partner Gone Wild"
Q: My ex-partner took footage that we shot and co-own and has uploaded many of our clips on youtube under his new LLC. I am planning on flagging these …

Documentary Legal Questions | How Careful Do I Need To Be?
I have a few questions. 1-if i film all my own footage in my own home dont show any trademark logos or anything company related use no music nothing else …

Documentary Copyright Question | Using Content From Dating Sites
Question: Can I use profile pictures and text from dating websites such as OKCupid without consent in an informational (not-for-profit) documentary? …

Documentary Consent | Can I Sue?
A German or French documentary was filmed in Israel and broadcast in France or Germany and I was filmed purchasing goods at a grocery store in Jerusalem …

Can I screen uncleared video at film festivals?
Documentary filmmaking copyright and fair use question: I am working on a documentary about a coffee shop I owned. I have 4000+ photos that are edited …

Incidental music on documentaries
Question: I'm working on a documentary and the main character is always walking around the streets of a busy downtown, there is music everywhere playing …

Legality over filming live music?
Hi, I want to film live sessions of music artists to create a local you tube hub. Many of the artists I film will be unsigned, so what if they do get signed …

Copyright Question: How To Get Permission To Use Video Game Footage In My Documentary
Question: Hello, I am working on a documentary called "The Art Of Video Games and the Positive Effects They Have On Us". I would like to get permission …

How do I copyright my documentary idea?
Question: I have what I believe to be a very marketable documentary. What would be the process to copyright my idea? Law Office of Jaia Thomas | …

Copyright Question: Filming With Live Music In The Background
Question : If you're shooting a documentary at a film festival with live music being played in the background, are copyright issues the same for live …

In Need Of An Entertainment Lawyer. Help!
Question: I've just been sent a very long 40-page contract by a production company looking for documentary filmmakers to profile in a new television …

How To Get Permission To Use Materials In My Documentary
Legal Question: After I find out the copyrights of a source, a clip or a related movie, where can I find a permit or who do I contact to ask what materials …

Copyright Enforcement Outside Of United States
Legal Question: Are the copyright rules listed on your website (see Legal, Consent and Copyright Issues for Documentary Filmmaking ) also enforced outside …

Doubt On Interview Consent For Documentaries
Question: If I ask the person: "Hello, can I interview you for my documentary about this and that", and the person answers "yes" (all being filmed). …

Is email reply good enough for a clearance on photos taken from the Internet?
Question : I'm in the process of finishing up a documentary film, I am emailing requests for clearances for several photographs taken off of various websites. …

Can a documentary-maker distribute a film featuring me without my written consent?
Question: I recently took part in the shooting of a documentary. In fact, I was the main subject. Throughout the process the film-makers have shown a …

How do you start a film production company?
Question : Hello again! I started filming a documentary series about music festival culture in April. Now I have a ton of footage and im about to start …

Should I Get Paid For My Memoir If It's Made Into A Documentary?
Question : I have written my Memoir, Gail Of Wind A Hard Walk Into Reality , and it is selling very well. Now a filmmaker wants to to a documentary …

Documentary Rights for YouTube Clips
Question: I'm planning to make a documentary about a person, we both are keen on working on this together. He has many clips on YouTube, can I use them? …

If I show a product like a car or can of pop is it trademark or copyright infringement?
Question: Do product labels have to be contacted or is blurred the easiest option? Thank you! Desktop Documentaries: I am filmmaker not a lawyer.. …

Remote Helicopter Cam
I am a college student doing an exchange in London. I have been filming a lot of what I've been up to, with consent forms and so forth. I have a remote …